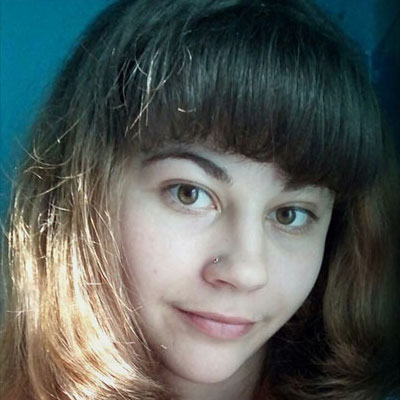 Zhanna Abashina (26) was born in the eastern Kazakhstan region, in the small village of Samarskoye. She began her work as an activist when she was 23 years old, and is now a social worker for Public Association that Supports People Living with HIV. Zhanna is also the Chairman of the Community of Counsellors for Counselling Patients Living with HIV, where she takes care of complaints related to discrimination in medical institutions. In addition, Zhanna works with Project Flagship as a peer navigator. This is her story…

When I was young, my parents divorced and I moved to Russia with my mother. Later, we began living with a man with alcohol addiction and soon she became addicted as well. They didn’t have jobs and we often had nothing to eat. My siblings and I were constantly subjected to humiliation and our mother’s boyfriend was beating us. In April 2001, I came home from school and found my mother dead, so our own father took us back to Kazakhstan. My childhood left a very big mark on my psyche. I closed myself up and became very aggressive and could not communicate with anyone. It was very difficult for me to understand why the world was so cruel. And I dreamed about growing up and helping people who were going through the same difficulties. I became interested in psychology so that I could better understand people.

But I did not get the chance to study. I had to leave home at the age of 14. I moved to the city of Ust-Kamenogorsk where I rented a small, cheap room and worked at a car wash, and later as a waitress in a bar. When I was 17, I met a man who was HIV positive, but he didn’t tell me. After a while, he disappeared and changed his phone number. In 2010, I found out that I was HIV positive. I did not know anything about HIV and didn’t know how to continue to live. I thought I was going to die soon.

I was very ill and had to be hospitalized. During my hospitalization, I met other people living with HIV for the first time. After my health improved, I started going to support meetings for people living with HIV, learning so much about the diagnosis from people who lived with it. Their bravery inspired me. I was able to accept my own status and decided to live openly with HIV.

“I understood why some people hid their status, but I wanted to set the example that my HIV diagnosis did not define me.”

Soon I became a volunteer so that I could help people navigate healthcare settings and treatment options and find support. I knew that the more we talked about HIV openly, the more people would understand that it’s nothing to fear, and hopefully we could make an impact on HIV stigma and discrimination.

“The fact is that HIV and HIV stigma are dual epidemics. And we will never end one without ending the other.”

The work I do to dispel myths and to fight against HIV stigma and discrimination in healthcare settings is what I’m most passionate about. The fact is that HIV and HIV stigma are dual epidemics. And we will never end one without ending the other. I see the effects of stigma and misinformation when counselling people who refuse treatment. Many of them are fearful of what their families or partners will say or do. But having lived through the difficulties in accepting an HIV diagnosis, I am uniquely suited to give them real-life advice and tools to understand HIV infection and the benefits of treatment as prevention.

These difficulties were common in the beginning, mostly because I was young and idealistic, wanting to see the immediate impact of my counselling and interventions. I lost a lot of sleep in the early days, beating myself up emotionally if I could not find a solution to help every person I encountered. Often, the hardest part of activism is being able to temper your expectations, to commit yourself to making long-term change that isn’t always easy to assess month to month, or even over a few years.

Another important lesson in activism is learning self-care. The tolerance and acceptance we give to our communities and clients must be shown to ourselves. For a while, I had problems with alcohol abuse and, thanks to supportive colleagues, I managed to get help for my addiction. Activists and those they advocate for can learn and grow from one another in unexpected ways. My work was a source of strength and inspiration when I was able to give birth to a healthy, HIV-negative baby in 2013. Everything I have achieved in my life so far, including my activism, has been both despite me living with HIV and because I am living with HIV.