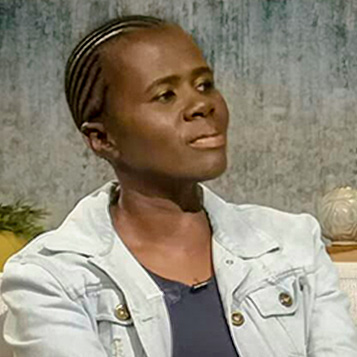 My journey to a TB cure

Noludwe Mabandlela, 40, is an IAS Member and assistant researcher from Cape Town, South Africa. She became a tuberculosis (TB) advocate after her own diagnosis in 2017 and, today, shares how access to the latest medicines is improving care for people with drug-resistant TB. This is her story…

In 2017, Noludwe Mabandlela, 40, was hospitalized with unexplained symptoms of a chronic fatigue and shortness of breath. After examination, her doctors in the township of Khayelitsha, Cape Town, diagnosed her with TB. She underwent a round of first-line treatment, but it was determined that she had multi-drug resistant tuberculosis (MDR-TB).

Her doctors responded by administering an injectable treatment – a long-standing treatment approach for MDR-TB in which people receive daily injections over the course of many months. This treatment’s potential side effects include hearing loss and kidney failure.

When Noludwe’s kidney function began to decline, her doctors halted the regimen and sought other options, one of which was a new TB drug, with less severe side-effects, called bedaquiline. This drug is one of the first new medicines to be developed for TB in many years, sparing patients the pain of daily injections, and the risk of permanent hearing loss or kidney failure.

Data from South Africa has shown that bedaquiline has fewer side effects and increased treatment success. The South African Department of Health, which recently moved to make bedaquiline available to MDR-TB patients as a standard treatment option, is leading the way in the provision of more people-centred TB regimens. South African officials expect this new treatment approach, which is shorter and less toxic, to improve adherence and ensure better outcomes.

Innovation and the continued development of antiretroviral therapies has transformed HIV treatment and led to the decrease of AIDS-related deaths globally. Today AIDS has ceased to be the leading killer among communicable diseases. However, TB, which is treatable and curable, has taken its place. TB is also the number one killer of people living with HIV, accounting for 40% of all HIV-related deaths in 2016. These linked epidemics require an integrative response.

TB and HIV communities are leaning into the lessons learned from the HIV response, by calling upon heads of states and governments to attend the UN High-Level Meeting on TB and commit to the following five actions:

Together, these actions can:

Take part and send a message to YOUR head of state on Twitter.
Learn more here.