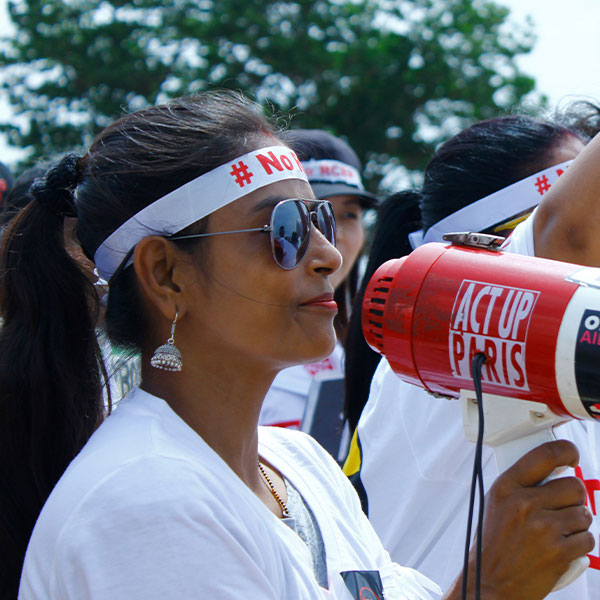 Life on the edge: COVID-19 and HIV in India

In late March 2020, the government of India ordered a nationwide lockdown to curb the spread of COVID-19. Measures taken by the government, such as a ban on public transport and authorization to travel for medical supplies, caused many challenges for people living with HIV – especially those living in the poorest areas. Eldred, Maitri and Loon share their stories on the difficulties faced by people living with HIV in accessing HIV and related services during the COVID-19 pandemic lockdown in India...

I have been living with HIV for the past two decades. I worked as a coordinator for the Bengal Network of Positive People over a decade ago and then a peer counsellor for the Delhi Network of Positive People. I have worked tirelessly, assisting people living with HIV in accessing services and treatment in the public health system. As an activist, I have participated in protests against drug stock-outs and free trade agreements that undermine access to medicines for people in developing countries.

For the past two years, I lived in pain with ulcers in my mouth and was diagnosed with tongue cancer in March 2020. Due to the pain, I was unemployed for the past year, unable to speak or eat properly, and had no means to pay for costly cancer treatment. I was in the more vulnerable category due to pre-existing HIV, and doctors said I would take more time to recover than other clients.

The doctor in the cancer department of the All India Institute of Medical Sciences (AIIMS), Jhajjar, a government hospital, said that I needed to start treatment as soon as possible. However, on the day I was supposed to go for my tests, I discovered that the hospital had been converted to a COVID-19 facility. New cancer clients were told that all appointments were cancelled.

A few days later, I started to bleed profusely from the tongue. My haemoglobin fluctuated and my weight dropped. I approached the government hospital near my home, one of the most respected medical colleges and treatment facilities in the country. They admitted me in the emergency section to stabilize me. But they refused to start cancer treatment. I approached the Delhi High Court, which ordered AIIMS, Delhi, to start my treatment.

“One requirement to start treatment was to have my viral load (VL) for HIV tested. But COVID-19 testing was a priority in the public health system and VL testing for HIV was not available, although I had given a sample. I witnessed first-hand the massive disruption of HIV services due to COVID-19. It was as if we did not exist. I had to go to a private lab for testing.”

One requirement to start treatment was to have my viral load (VL) for HIV tested. But COVID-19 testing was a priority in the public health system and VL testing for HIV was not available, although I had given a sample. I witnessed first-hand the massive disruption of HIV services due to COVID-19. It was as if we did not exist. I had to go to a private lab for testing.

I have just finished chemotherapy and radiation sessions. My ulcers have started to heal. Most importantly, I have to work towards improving my weight, which has fallen to 24kg.

There were a few instances of discrimination during my cancer treatment. Staff of Fortis Hospital, a private hospital chain, approached me after reading news in a daily newspaper about my inability to get treatment in the government sector. They called me to their hospital to discuss subsidized treatment.

“However, when the doctor learnt that I was living with HIV, he got very angry. He asked me to leave his office and verbally abused my husband who had accompanied me. The doctor complained that he had not been told about my HIV status before I entered his office.”

During chemotherapy, I faced many instances of discrimination. My HIV status was written in big letters on receipts for chemotherapy. The attitude of hospital staff would change when they saw it. During chemotherapy sessions, I was not given a bed, but was made to sit on a chair away from others. The staff would try to push my number to the last in line. But there were also acts of kindness. At times, my treating doctor intervened to ensure that I did not have to wait for so long.

“While every care should be taken to control COVID-19, neglect of other diseases is unacceptable. HIV services are adversely affected. ”

The government’s response to health sector challenges from COVID-19 is not adequate. While every care should be taken to control COVID-19, neglect of other diseases is unacceptable. HIV services are adversely affected. Tests and diagnostics have suffered, which reflects in the quality of treatment. People living with HIV and other co-morbidities are facing additional challenges as I have conveyed in my story. It is difficult to raise our voices against discrimination because it is difficult to mobilize the way we did before – through meetings with the health ministry and HIV programme and through protests.

Based on my experience, I would say that people living with HIV and their networks should fight for timely diagnosis and continuation of services. They should also raise issues of discrimination and lack of services for chronic diseases as they face more troubles if they are not treated in time. If need be, legal recourse should also be tried so that people living with HIV do not suffer the brunt of the pandemic.