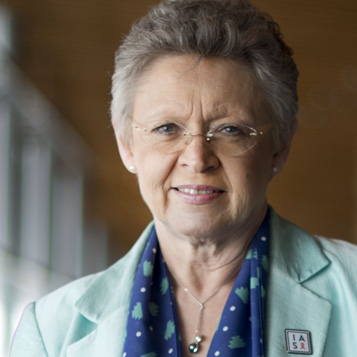 From discovery to a cure: A conversation with Françoise Barré-Sinoussi

In 1983, Françoise Barré-Sinoussi, a young French virologist, co-discovered the human immunodeficiency virus (HIV). Since that time, Françoise has dedicated her life to prioritizing basic science in the fight against AIDS and to advocating with and for people living with HIV around the world. In 2008, she received a Nobel Prize in Medicine for her groundbreaking co-discovery.

Françoise was elected to the International AIDS Society (IAS) Governing Council in 2006 and served as President from 2012 to 2014. She currently serves as Co-Chair of the IAS Towards an HIV Cure initiative and on the Conference Advisory Committee for the 9th IAS Conference on HIV Science (IAS 2017), which will take place in Paris, France, from 23-26 July 2017. In this personal interview, Françoise shares when she discovered her passion for research, the conversations that led to discovering HIV, and the obstacles facing women in science. This is her story…

When did you realize that you wanted a career in science?

This is a very difficult question. You don’t really know what to study when you are young. You are trying to think about your future and your career. For me, I was very much interested in science from a young age. During my vacations, when I was a child, I could spend hours looking at animals, comparing the behaviour of one animal to another, trying to understand, for example, why one was not running as fast as the other. I then realized at school that I was very good at science. It was very easy for me to learn compared to other subjects. So that is when I said to my parents: “I think I’d like to go to university to study science and maybe become a researcher.

To tell you the truth, I was more interested in becoming a doctor but I realized that I was from a family of modest means, and I had a false idea in my mind that obtaining a medical degree was longer and much more expensive than getting a science degree. So that’s how I originally made my decision to study science instead of medicine. However, I realized that I was wrong because the length of study was about the same.

I started my studies at university and after two years I wondered whether I made the right decision. So I decided to try to find a research laboratory that would accept me to work part-time while continuing my university studies. It took me almost a year to find one, but I finally was accepted by the Pasteur Institute. At that time, this was very unusual and it was very hard to find a lab. Very quickly, I ended up working full-time, not part-time. I tell students now that I am not a good example - I stopped going to my classes, I asked friends of mine to give me their notes, and I just went to the exams. It turned out that I was better at the exams than before because the motivation was there. I understood by working in the lab that this was really what I wanted to do. I finally realized that I had made the right decision, and I must say that I don’t have any regrets at all.

I understood by working in the lab that this was really what I wanted to do.

How did you start working on HIV?

A group of clinicians in France came to us at the Pasteur Institute, Françoise Brun-Vézinet was among them. She had remembered when she was taking courses at the Pasteur Institute that Jean-Claude Chermann, Luc Montagnier and myself lectured on retroviruses. They contacted us to ask a very simple question: “Do you think that this new emerging disease (that was not yet called AIDS) could be due to a retrovirus?” Specifically, they asked us if it was due to the human T-cell leukaemia virus (HTLV), which was the only human retrovirus identified at the time. We answered their question - we didn’t believe HTLV could be the cause of AIDS from what they were telling us. The depletion of CD4+ T cells in patients is not really a characteristic of an HTLV infection, which is more of an oncovirus infection. So by talking and discussing with them, we concluded that it might be a retrovirus but not HTLV.

When did you realize the scale of the epidemic?

In 1983, when we isolated the virus, everybody thought that the epidemic was very much limited to what we today call ‘key populations’. At the beginning, the disease was even called the ‘4H disease’. The four H’s referred to: homosexuals, hemophiliacs, heroin addicts, and Haitians. That was a big mistake obviously. The fifth H was missing, the heterosexual population. We really started to realize the magnitude of the epidemic in 1984, and especially in 1985 when we went to Africa and saw what was happening in hospitals across the continent. The first country I went to was the Central African Republic, with Jonathan Mann and some other colleagues, and we really realized at that time that most of the people in the hospitals were dying from AIDS. The clinicians over there did not even know that their patients were dying from AIDS. So it was really at that time that we started to realize that something was going on, and that it would probably be a terrible epidemic. We learned that HIV was not only an epidemic in Africa but in almost all regions around the world.

There is an alarming trend in the general public’s perception that the AIDS epidemic is over. What do you have to say about that?

This is the main thing that makes me very nervous for the future because obviously that’s not true. We know that today we still have 37 million people living with HIV in the world. We know that we still have two million new HIV infections every year. We also know that even if there is a decrease in terms of deaths, if there isn’t a decrease in terms of new infections, we are far from it being over. We know that only 40% of people living with HIV are on treatment. We know that it’s a life-long treatment. We know that in the long term, people who are on treatment have a higher life expectancy, but we also know that over the long term, patient adherence to treatment is not as good as we would like. We know that most people are diagnosed very late, too late still, and that access to care and treatment is far from being perfect. So HIV is still a very real threat, we can even see in some key populations an increase in the number of new HIV infections, for example among men who have sex with men in France, the United States and Australia. Why do people think that HIV and AIDS is over? I guess it’s because they all know there is treatment, but they have to speak with the people who are on treatment. When you speak with them, obviously they are doing better than before - their life expectancy is about the same as for those who are HIV-negative - but the vast majority of them are asking us: “When will you have a treatment that we can stop taking? Because we are still subjected to stigma and discrimination, and we are still afraid to infect others.”

When did you become involved with the IAS and why did you start the IAS Towards an HIV Cure initiative?

I was involved in the International AIDS Conference before the IAS existed. The second conference was organized in Paris in 1986, and I was part of the organizing committee. At the conference in Stockholm in 1988, Lars Kallings and some other colleagues decided to create the IAS. So I have been in some way part of the IAS since the very, very beginning. I was elected to the Governing Council in 2006.

In 2009, I thought it was the right time to try to stimulate research on cure, which is one of the advocacy activities of the IAS. So I proposed Towards an HIV Cure, as an IAS initiative, to encourage research on cure by organizing a symposium to bring basic scientists together with clinical researchers, and include patient representatives and people from resource-limited countries.

After our first symposium in Vienna at the 18th International AIDS Conference in 2010, I remember that the audience really appreciated it and they asked me what was next after the symposium. Initially, I thought let’s organize a pre-conference symposium every two years or every year, but then I thought let’s try to do more. Let’s try to have an international alliance to stimulate research on HIV cure and let’s try to have a scientific agenda to define priorities in the field of HIV cure. Let’s try to bring in more key stakeholders that are interested in the field of cure research, and let’s give them our scientific agenda for grant applications and for consortiums to really stimulate multidisciplinary science in the field. And let’s also try to have the private sector work with the public sector. So that’s how the Towards an HIV Cure initiative started.

As a Nobel Prize winner and a woman in science, what would you say to young women in particular, who are starting their career in science today?

I would like to tell them that if you are sure, totally sure, that you want to be a woman strongly involved in science, and are highly motivated, then you have to be very persistent. There will be a lot of obstacles because being a researcher is not easy, especially when you are a scientific researcher and a woman. However, if you are convinced that it is really what you want to do, be very enthusiastic, very determined, and you will be a winner.

Do you think it is possible to find a cure and end AIDS by 2030?

That would be really great! It’s a dream you know. Whether this dream will be transformed into reality, it is difficult to say in advance. I think it’s going to be very difficult because that means that we have to make tremendous progress to reach people who are HIV-positive, to test people everywhere in the world, and to also make progress in countries where there are still repressive measures against people living with HIV. For me, it’s always best to set a very high and ambitious objective because that’s how you will get as close as possible to it. So in my view, I’m not really sure that we will meet this objective of ending AIDS by 2030, but at least we will have tried our very best to reach it.

As for a cure, that depends on the definition of a cure. If it means a total elimination of the virus from the body, meaning that it is possible for someone who is HIV-positive to become HIV-negative, this is again an almost impossible mission, at least today, with the technology, knowledge, and approach that we have. However, maybe in one, three or five years from now, we will have new technologies that will allow us to make tremendous progress to be able to detect all the reservoirs in the body and to target a single latently infected cell in the body. In that case, we will be able - if we target all the latently infected cells - to eliminate the virus. Today, we just don’t know how to do that yet.

However, what I am very optimistic about is achieving sustainable remission after stopping treatment. This is really something that is feasible - I am totally convinced.